Why I’m Not a Multitasking Momma

by Amber Temerity | Save Time | 8 comments 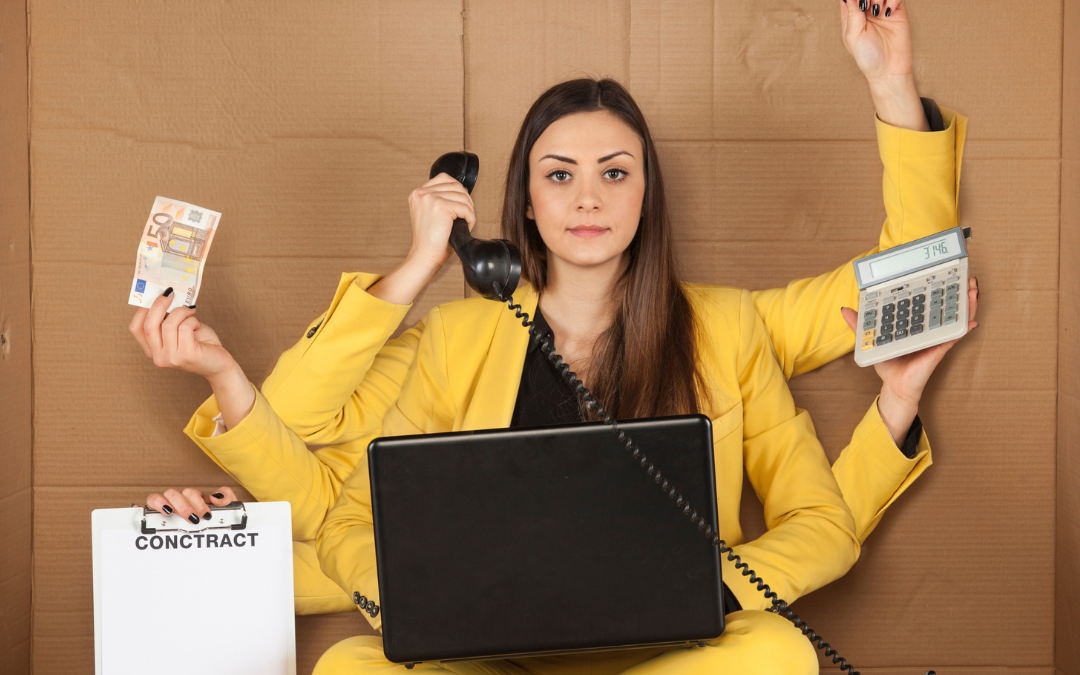 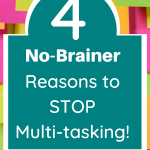 Is it possible to stop multitasking and get more done? Well, as a work-at-home mom with two preschoolers, this may come as a shock to you but —

I don’t believe in multitasking!

Insanity, right? But as a mom and as an efficiency strategist, I want to share with you why I think we need to stop seeing “ability to multitask” as a strength, because frankly…

When you think of multitasking as more than just “chewing gum and walking at the same time”, you’ll quickly realize it’s not actually multitasking at all, but task-switching. And when you’re asking your brain to CONSTANTLY switch gears, it’s no wonder you’re exhausted all the time and feel like you’re getting nothing accomplished.

There are certainly times in which you can do two tasks at one time – checking e-mail while jogging on the treadmill, for example – but even that only goes so far. If you had an important e-mail to write out, you’d almost certainly wait until you were done exercising. It’s the same reason you turn down your radio when you’re driving and think you may be lost; your brain can only stretch so far when attempting to do more than one thing at a time. 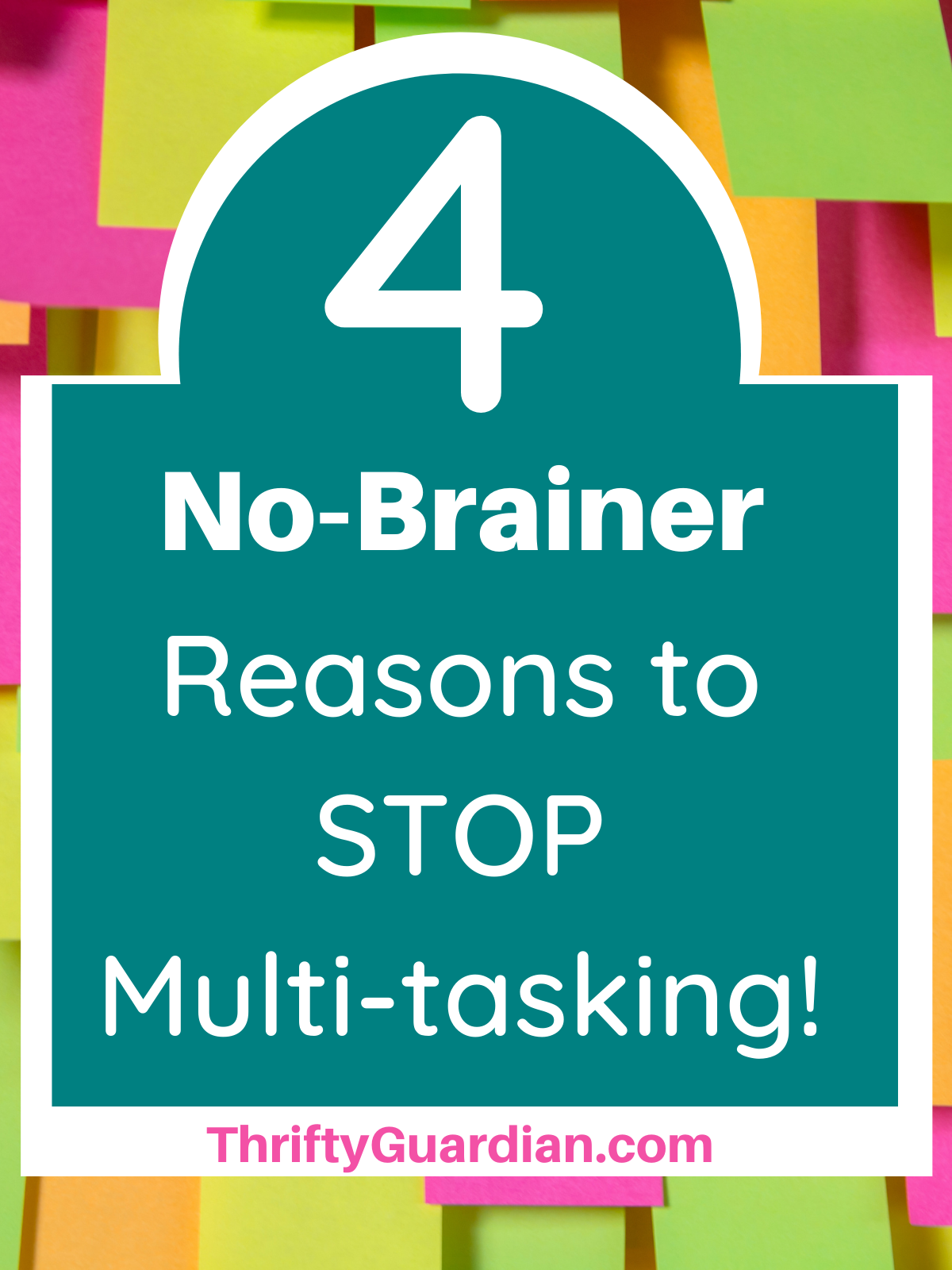 Multitasking is not efficient.

It’s also important to note that multitasking is also incredibly inefficient; the more you try to “multitask”, the more apt you are to make mistakes.

How many times have you accidentally used baking powder instead of baking soda because you were trying to make muffins while checking your child’s homework and also writing out a grocery list? Or how many times have you misplaced your keys because as you come into the house you’ve suddenly got three people wanting ten different things? It’s not just the stress that makes you feel frazzled, but it’s your inability to break the multitasking habit.

Speaking of stress, though…

Multitasking stresses you out, not just from the mistakes you made, but also going back to one of my original points: you’re exhausting yourself and your brain.

When you try to multitask, you use up what’s called your “working memory”, your auditory and visual-spatial memory. Because of this, you’re basically bottlenecking your thought processes, but rather than filtering them through one at a time, you’re trying to jam them through all at once – hence the stress.

For example, I originally fleshed out this idea of banning multitasking while on a walk with my son. Do you remember the viral video a few years ago about counting basketballs and in the middle of it, a gorilla walked by and almost all of us missed it? It’s because our brains were so focused on the basketballs that we missed the “beauty” of the gorilla.

So likewise, when you’re looking down at your phone while waiting for a bus, you may miss the love of your life walk by. Or maybe you’re watching TV while reading this post, and you’re losing out not only on some productivity tips, but you’re wasting your time by even trying to process what it is I’ve written.

Should we stop multitasking altogether?

Despite everything I’ve said, I don’t mean that you should stop multitasking all together, because let’s face it – there are times when multitasking is a MUST (whether we like or not!)

Take this morning, for example:

Kids woke up when I did at 7am and I offered them 30 minutes of “tablet time” in exchange for the freedom to knock out a few e-mails to my clients.

They agreed to it…until 7:10am when I heard “MOMMMMM! I’m STARRRRRVING!” (This comes from my oh-so-dramatic 4 year old son.)

“Hmmmmmm….how about french toast?” he said with his signature charming smile.

So now instead of writing that email, I had to settle a debate between the children regarding which kind of breakfast bread they wished to consume.

(Spoiler: We settled on french toast with the promise of pancakes tomorrow.) My daughter doesn’t take my multitasking advice; she prefers a bit of light reading with her breakfast…

And of course as I started to make french toast, I realized I should also feed the dog and the cat. Oh and finish up some dishes. Oh and see if dinner requires any early prep work today. Oh and….

So rather than trying to juggle it all at once, I took a breath, grabbed my headphones, and used voice-to-text to map them out while the smell of butter and cinnamon filled the early morning air.

And as I was talking out my e-mails over the sound of egg-battered bread hitting the skillet, I found myself smiling. Because even though life is often a bit chaotic, it’s exactly what I’ve always wanted.

I’m my own boss (if we don’t count those two little ones who call me “mom”) and I get to spend my days not only living out my own dreams, but helping others do the same. All at my own pace, by my own choosing.

So do we multitask…or no?

If you’re like I was a few months ago, maybe the thought of not multitasking has never even crossed your mind. Or maybe you read this post and thought “DON’T multitask? HA! Yeah right…” But why not give it a shot?

I challenge you to try going just ONE day — it’s only 24 hours! — without multitasking. Meaning no podcast playing while you drive to work. No Facebook scrolling in the bathroom (gross). No folding laundry while watching TV. Only single-tasking allowed!

I guarantee you’ll be surprised at how difficult it is. Our brains have been trained to want to multitask, no matter how harmful it may be to do so. It’s like when you try to quit sugar – you don’t realize just how addicted you are to it until you try to stop.

Now if you’ll excuse me, I have a toddler eager to serve me some play-doh cupcakes. 😉 Oh but before I go – what do you think…Will you try to quit multitasking for a day? I’d love to hear about it in the comments below!