The One Answer Google Couldn’t Give Me… 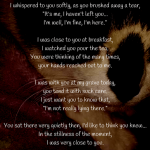 How do you know when it’s time to put down a pet? How do you let go of a friend that’s been with you for two-thirds of your life? How do you explain pet loss to children??

I’m logical to a fault. Every answer exists on Google except for this one…

How do I know (like REALLY know) when it’s time to put down my cat?

I’ve been living on my own now (more-or-less) for almost 13 years.

I’ve been a mother for 5 years.

And this is the most adult decision I feel like I’ve ever had to make.

How can I be certain it’s time to let her go? It was the summer of ’99 when I first found my cat Freckless…yes, Freckless. We wanted to call her Freckles, but my mom said “Why? She doesn’t even have Freckles! She’s FreckLESS!”

Mom always named our pets. Drove me bonkers. But this time it felt right.

Freckless was born on my great uncle’s farm in Wisconsin, a farm we had camped at every summer since I was born. She was just one among a litter of barn kittens but I loved her. My mom was adamant that we were not taking a single cat home but that didn’t stop my sister and I from sneaking out of our tent to sleep in the van and bring all the kittens in with us….Needless to say, the next morning was a bit of a mess…

(As a mother, I now recognize how enraged I would be to find kitten s*** all over my van. And yet…)

When it was time for the camping trip to end, all four of us kids were begging to keep Freckless.

With an annoyed sigh, my mom climbed into the front seat of our van and slammed the door shut.

“I already told you no. No kittens. You know your dad would say the same,” she said firmly, “So I’m assuming there are no kittens in the van, right?”

“There is,” my brother cried, “and we’re not putting her out! Please, Mom!”

Again we were in hysterics.

With another heavy sigh, my mom replied, “Listen carefully to what I am saying, children. I said no. Your dad would also say no and if he asks, I will tell him that you all told me there were no kittens left in the van. So again – I’m ASSUMING the cats are all out, yes?”

Still crying, we all continued to plead the case for Freckless…until finally my little brother goes “Oh. Oooh…yes, Mom, the kittens are all out!!”

(Clearly he was the quickest of the bunch.)

It still took a solid two minutes of back-and-forth before the other three of us kids caught on.

We thought it was hilarious once we figured out her “assumption”…and failed to play into Mom’s lie when we got home. Luckily Dad was on board and Freckless became family. Every single night, I would call for her to come sleep in my room and every single night she responded. Leaving her behind for college was brutal, so much so that I ended up getting my own off-campus apartment halfway through my sophomore year so that Freckless and I could be reunited.

When my college boyfriend and I broke up after four years, she was there.

When I got my first real world job, she was there.

When I had my “quarter life crisis” and moved back home to my mom’s, she was there.

When a guy I was dating finally admitted he never came over because he’s allergic to cats, she was there…..him not so much.

A few moves and a few boys later, it was Freckless who first realized I was pregnant. While she loved sleeping by me each night, she was never a playful or needy cat…and suddenly she became my shadow. I couldn’t leave a room without her following me, she’d meow loudly should I dare to shut the bathroom door, and she had to sleep on me each night. I was terrified there was something wrong with my sweet baby kitty cat, but it turned out she just knew I had (another) baby on the way.

She’s been there for every heartache, every mistake, every celebration, every milestone…every thing.

For over nineteen years.

Well, in the wise words of my three year old daughter – “With love, Mommy. Give her brushes. Give her love. And then we have to say goodbye.” And so that’s what we did. After many tears (with many more still flowing) I said goodbye to my sweet girl today. She didn’t even flinch as they gave her the shot to help her sleep before the final dose of medicine to stop her heart. She knew nothing but love as her spirit left her body. So while my heart aches for her absence, I have no doubt she’s in a better place. 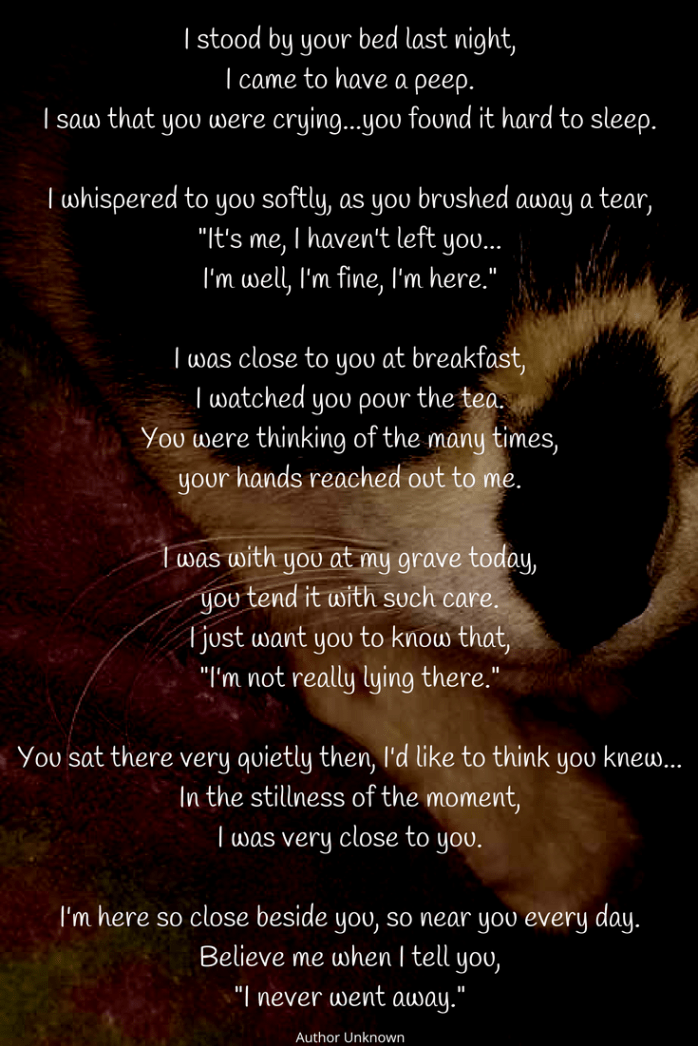