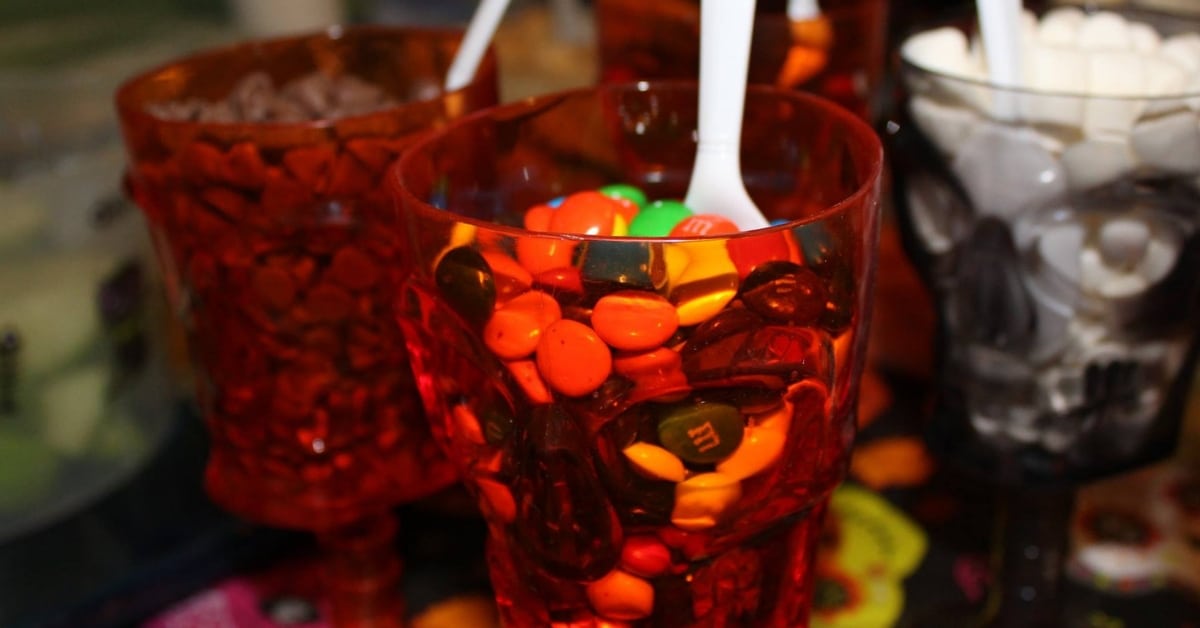 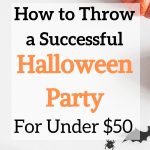 My son’s birthday falls near Halloween, so we’ve gotten very good at the groove of spooktacular parties, and while throwing Halloween parties (or any parties, for that matter) can be as elaborate as you want it to be, we’ve mastered the cheap-but-awesome Halloween bash.

Halloween Party Ideas on a Budget

If you’re looking to have a spooky shindig of your own without murdering your budget, here’s some ideas we’ve put into practice that are thrifty on money but big on fun.

Be Creative in Costuming

Something that I’m of course a big fan of doing is going through the post-Halloween sales at stores, getting an idea of what my kids might like to wear down the road. We picked up 3 $40 costumes at Toys R Us last year for less than $10 each on Halloween, and that’s what the kids are wearing this year (be on the lookout for the cutest Pikachu ever!!) 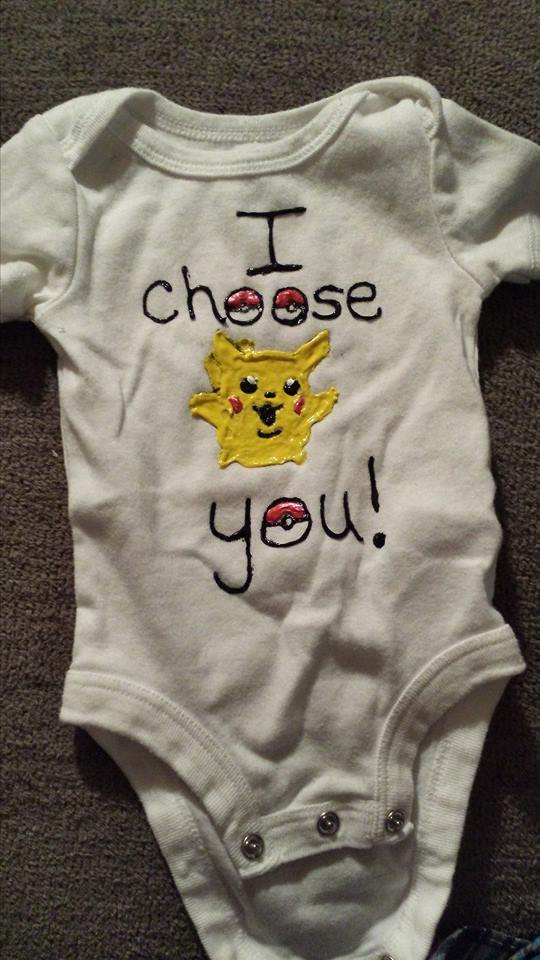 Update: Heh okay so maybe Toys-R-Us is no longer an option (RIP) but there are plenty of stores that sell their costumes on clearance after Halloween has passed. Even if you don’t know for sure what your child might want to be, if the costumes are cheap enough, they’re worth the gamble! You can always resell them if your child decides he no longer wants to be a Dinosaur and is instead a cowboy from outerspace!

For the adults, last year we were all about punny costume ideas. My husband wore a wool pig hat and pinned a blanket over his shoulders and I took a yellow shirt, made rings of black duct tape around it, and pinned on some felt letters. Adding an antennae hair band and black pants completed my costume. Do get it? Heh not all our guests did, but I still stand by us being oh-so-punny… In all honesty, cheap and clever costumes always win the day over elaborate, expensive, pre-made costumes from stores, which cost and arm and a leg and are usually pretty hideous. Though, this year, I really do want us to go as Malcolm Reynolds and Inara…ideas on doing that frugally are most definitely welcome!

A Little Decoration Can Make a Big Impact

Black everywhere is a good way to increase the spooky mood, and save on pre-made Halloween props. A big, black sheet over the couch will help protect it from your party guests while also helping to darken the room and elevate the atmosphere. In addition, taking an old sheet and shredding it or cutting ragged holes in it and using it as a room divider or pinning it up over an entrance way is a creepy-but-cheap addition to your party’s décor.

One of my favorite cheap decorating centerpieces is to buy a large bag of those spiderwebs that are sold around this time of year. One big bag will usually run about $3 or less, and if you take your time to stretch it well, finding lots of edges and nooks to catch it on, it can fill a room and really make an impressive display for your party.

Lighting is your friend as well, because it can be altered in a magnificent way with very little expense or difficulty. Repurposing Christmas lights but filtering them with gauze or wrapping them around a bowl of red punch is a great way to add a spooky effect with what you already have. Dying cheesecloth black, or using black or red tissue paper and covering light fixtures (ones that use cool-touch bulbs, mind you!) adds a touch of creep for super cheap! Decorating for Halloween on a Budget


August and September are great months for garage sales, as it’s normally cooling off and hopefully drying out. This is also a great time to snag costumes, decorations, and other things to repurpose for Halloween concepts. We’ve picked up a lot of our favorite decorations from garage sales for .25 cents to $1, everything from serving platters and pumpkin buckets, to big, showy, light-up decorations.

On the other end of that spectrum, having your own garage sale and selling things like costumes around this time of year will help you get some extra spending money to update your Hallo-wardrobe or decoration supply for the upcoming season.

This year I created a super cute moon-shaped Halloween Wreath using all dollar store supplies! This wreath only cost me $5 and it glows in the dark. I absolutely love it!! You could truly lose yourself in looking up dollar store halloween decor ideas, but let’s face it – it’s a lot of fun and a great way to do Halloween on a budget!

I’m also a really big fan of these Halloween Window Rainbow Clings – you can get a set of 16 for less than $14!! Not only are they super fun – kids and ads will love them – but these Halloween window rainbow clings are suncatcher stickers. Meaning when light shines through, you’ll see a beautiful rainbow cast through. Similar to when light is shown through a prism! I actually really love using these on my car windows, it always brings a smile to my kids’ faces as they look for the rainbows at the stoplights. If you’re throwing a frugal Halloween party, these are also perfect to include in goody bags. 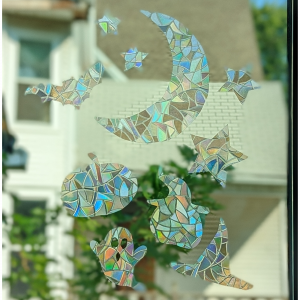 Last year we picked up 5 skull goblets from the dollar store for $5 total, and then got a big bag of apples, some chocolate chips, some coconut flakes, some peanuts, and some caramel from Aldi, altogether for under $10.

We crushed the peanuts and sliced the apples, and set each goblet out, full of toppings, and had a caramel apple bar, with plenty to go around. It was a huge hit, and for about $15, of which $5 will stick around in the form of the goblets which we kept to use again. 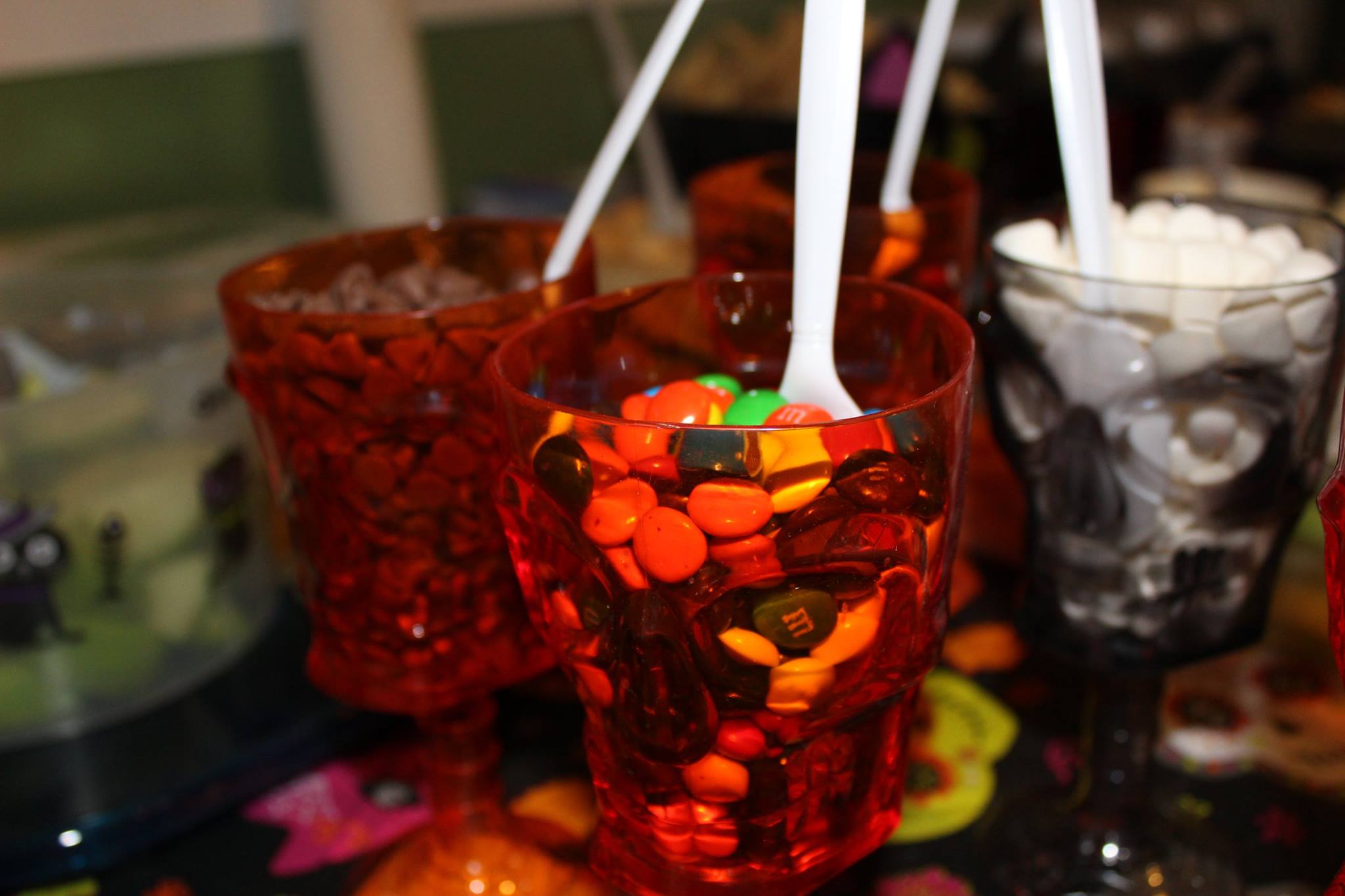 I also make deviled eggs and cut black olives to look like spiders or use green onion to make “pumpkins” – it’s time consuming but the effect is adorably spooky and freakishly frugal! 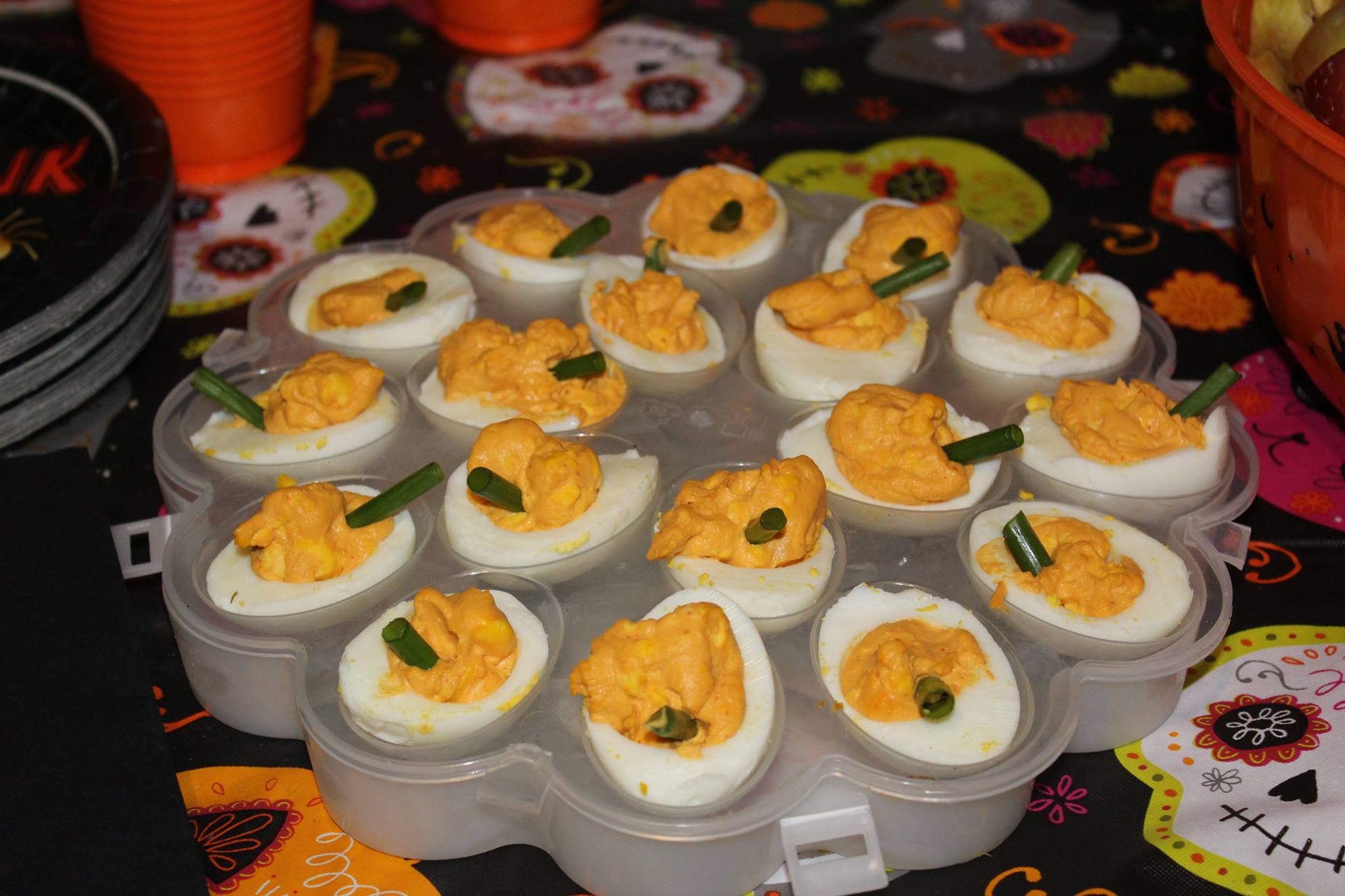 Broiling hot dogs and adding a sliver of onion as a fingernail, wrap them in string cheese to make mummies, or make a huge batch of chocolate pudding, add a layer of crumbled-up Oreo-like cookies, and add some gummie worms and cookie “tombstones” for a spooky-yet-tasty graveyard as a centerpiece to your food table.

Effort shows through more than money spent, and especially children will get a kick out of tasty treats presented in a horrific but friendly fashion. 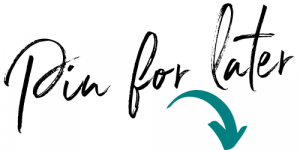 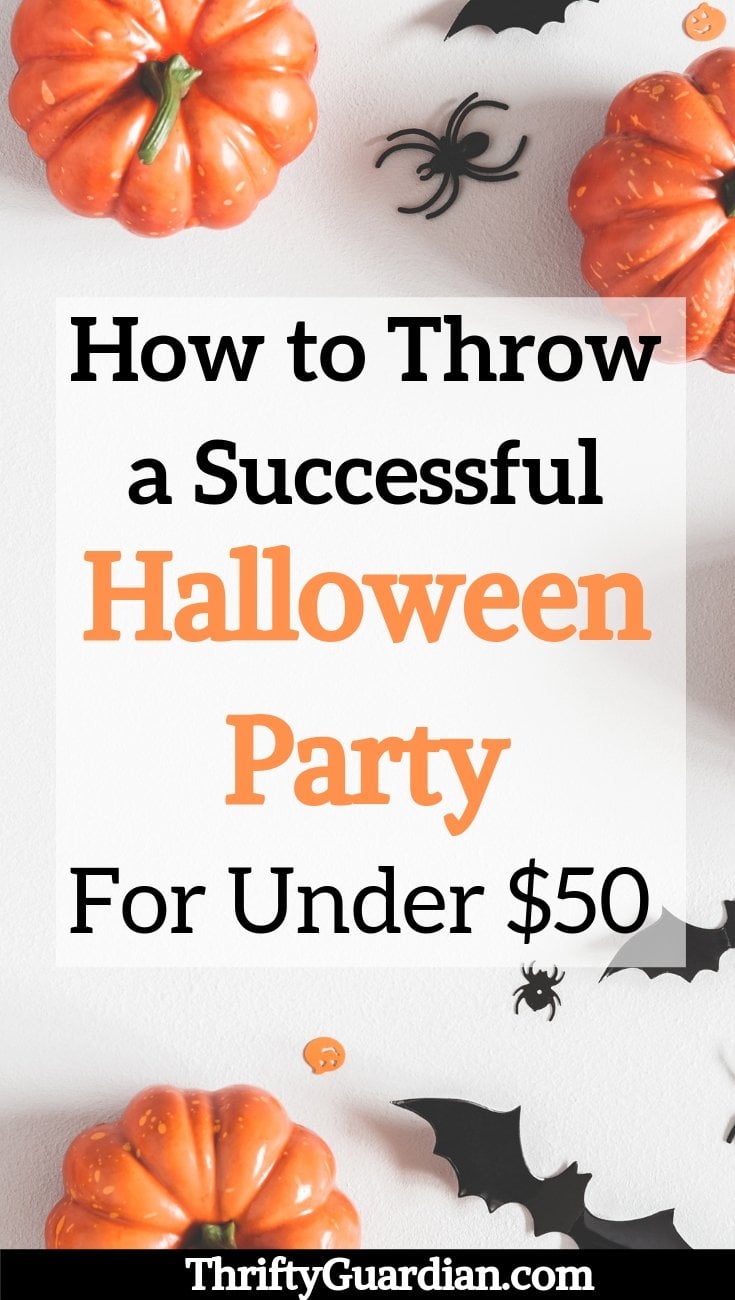 By utilizing these ideas, you can have a fantastic party for Halloween without straining your budget. In addition, if you’re a Halloween season fanatic like me, picking up decorations or party favors when they’re on clearance or at garage sales ensures you have to spend less the following year, as you’ll already have non-perishables covered.

Do you have plans yet for Halloween? I’d love to hear about your costume ideas in the comments section!