Is Euzema Revival Cream Worth Using For Eczema? 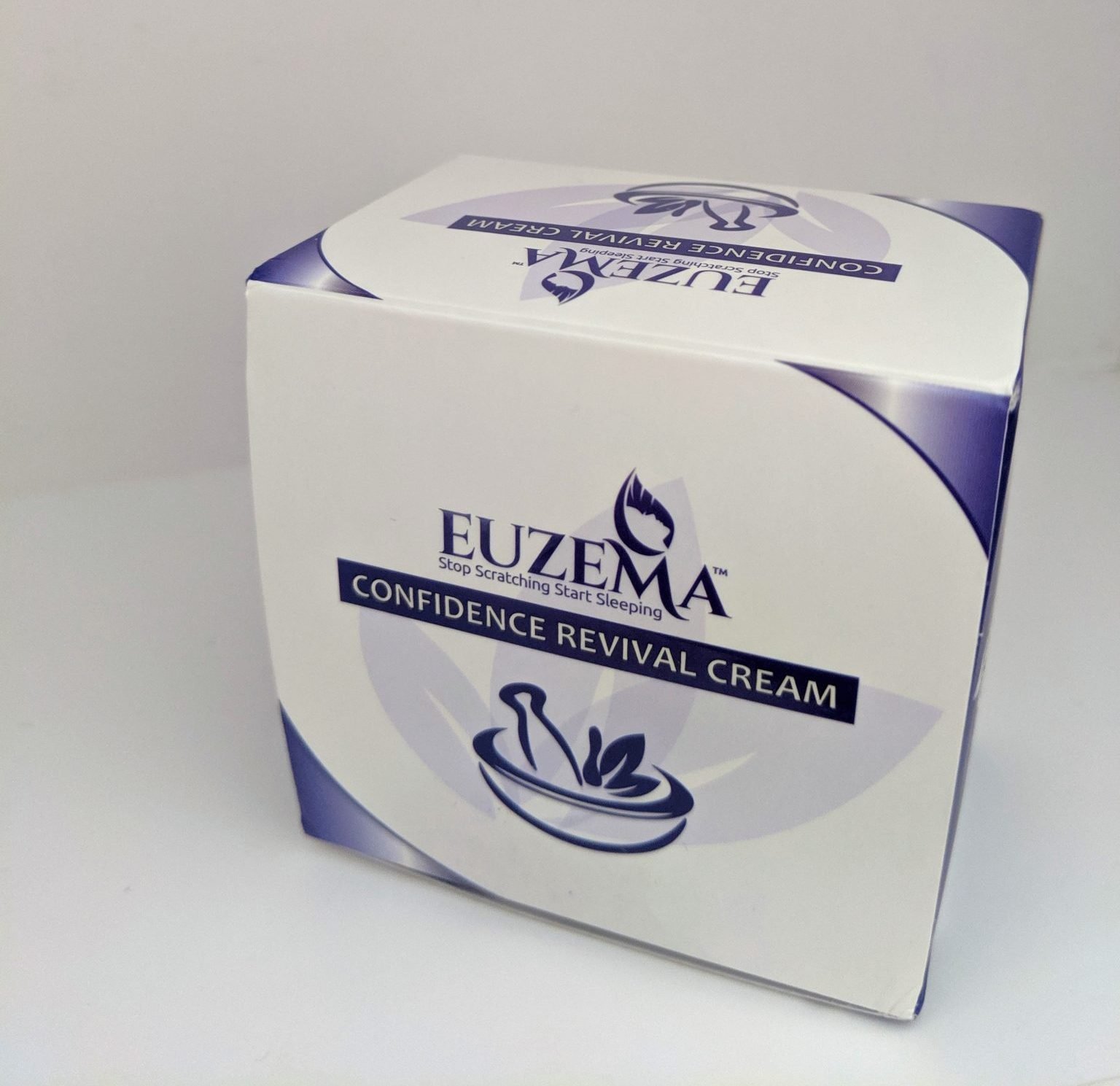 Natural ways to fight eczema aren’t easy to find – at least not ones that actually work. My daughter and husband both suffer from eczema, so we’re always on the lookout for something that can help with the itching and rashes. We’d picked up various skin calming lotions from Walgreens or other pharmacies and it always worked just okay to relieve itching. My husband has shampoo specifically for flare-ups that again does an okay job at relieving his symptoms.

Is Euzema Revival Cream Worth Using For Eczema?

I’m not a fan of “just okay” though, so when a family member recommended Euzema Confidence Revival Cream as a better solution, I decided to check it out. Right off the bat I noticed that they’re really pushing that it’s all natural and traditional ingredients that they use. I’m not suggesting this is good or bad, but it is their focus.

I picked some up and decided to do some experiments to see if it really was worth using compared to the stuff we already had.

Disclaimer: The links below may be affiliate links which means I may be compensated should you click through to make a purchase. This in no way impacts my recommendation of any products or services nor the cost to you.

The first thing I noticed is that it’s got an interesting smell. It’s not bad, but it’s very potent. There’s frankincense as an ingredient, but it doesn’t come across as strongly once applied. The consistency of the cream is something like paste, but it goes on silky smooth without an oily residue. A little goes a long way on rashes, as my husband used what he thought was a conservative estimate and found that it was almost too much.

The jar we got is small, but realizing it doesn’t take much made me feel better about the product size.

Is Euzema only for eczema?

The package claims to be useful for psoriasis, rashes, bug bites and allergic reactions, including just dry, flaky skin. While I wouldn’t want to use it just as a lotion for dry skin, it does appear to be useful if you’ve got an eczema-similar skin condition and need something. We wanted something without steroids, especially for our daughter and Euzema’s all-natural formula was a big selling point.

The fact that it’s supposedly useful for things other than clinical skin conditions like eczema and psoriasis is great. We have terrible mosquitoes around our neighborhood and we’re not without bug bites every evening during the summer. Having another tool to in our arsenal to combat the mind-numbing itching from summer bugs is always welcome.

But DOES it work? 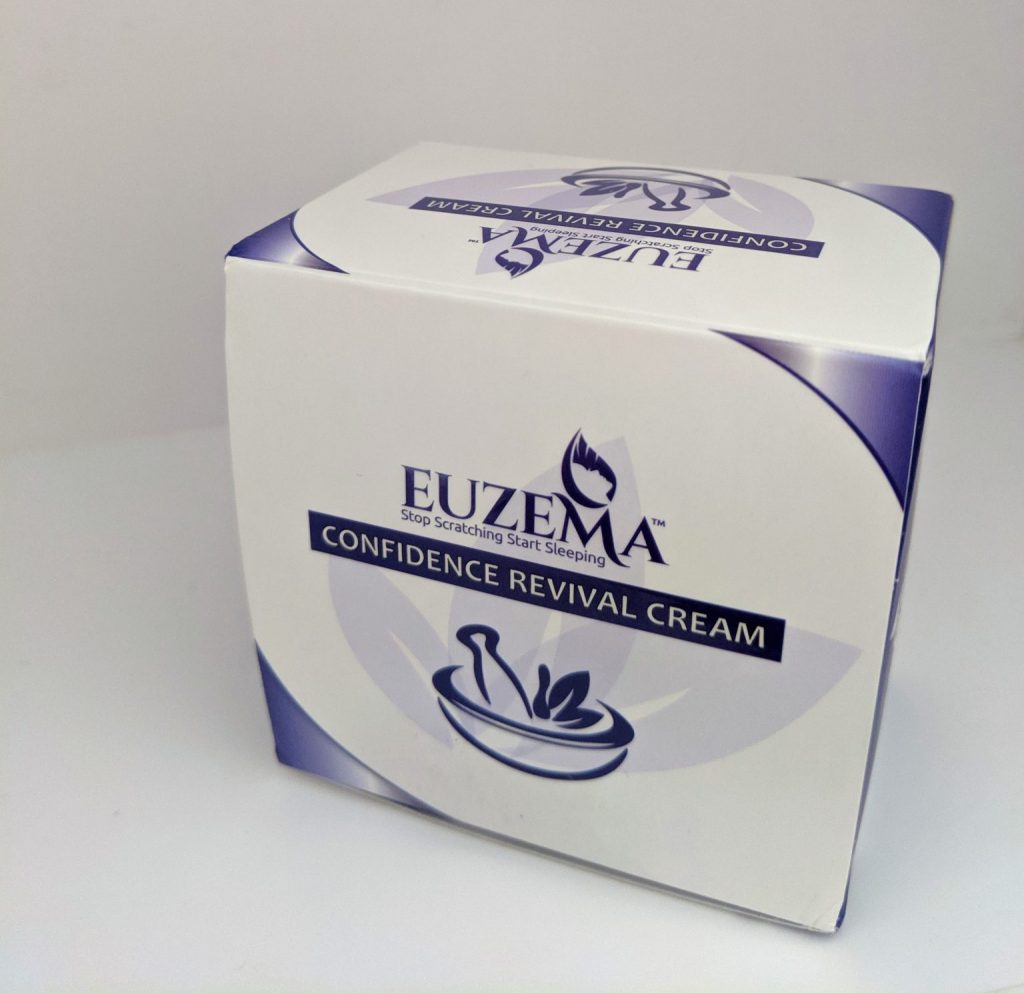 We did a couple of experiments to make sure it was:

1 – not going to cause a reaction itself and

First my husband and I both tried it on our normal, non-itchy skin. We rubbed in a pea-sized amount on our arms and waited and had no adverse reaction.

Next, my husband put some on an eczema flare on his face, and this was where he started with too much. It wipes off easily without a gross residue, though, so we finally dialed in the perfect amount. He said the itching calmed down almost immediately and within a few hours the redness had subsided significantly. The next morning it was starting to clear up, which put a smile on his face because flares are unbelievably itchy and obnoxious.

We tried it on my daughter’s itchy, dry eczema patches next and again, it quickly stopped the itching. The areas were significantly less red within a few hours. We also tried it on various bug bites we all had and it seemed to help calm the itching down.

Unfortunately (or fortunately?) we didn’t have any other rashes or bites to try it on, but the small sample size we do have seemed to indicate it works!

There are many natural herbs used within Euzema. First, there’s licorice root – famously known for its use in traditional Chinese medicine. Licorice root is great as an antiviral and really helps moisturize the skin.

Next there’s something called Aquilara Agallocha. To be honest, I’m not entirely sure how to say that, let alone what it was before using Euzema. A bit of research, though, shows me that it’s another name for Agarwood. Agarwood is often used in incense and it’s bark is turned into a paste for many skin conditions, including eczema.

Another one I had to look up was Trichosanthes Kirilowii Fruit. As expected, this fruit is another one common in Chinese medicine. It has many anti-inflammatory properties and is known for treating ailments both outside and within the body.

Lastly there’s the bamboo extract (yay one I didn’t have to look up!) Bamboo extract has natural anti-inflammatory properties and contains minerals such as: iron, Vitamin C, and calcium. Euzema even utilizes the natural wax of the bamboo to create the base of this ointment! 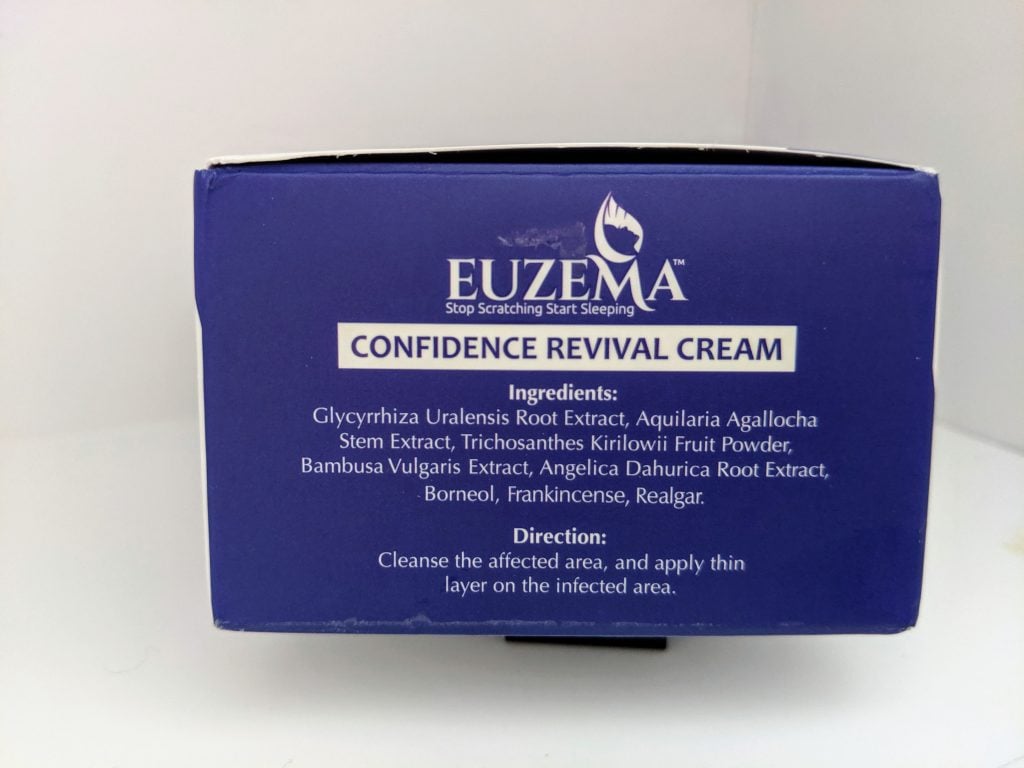 Is Euzema worth the cost?

My husband said it was much more pleasant than the calming creams we have. He said they typically almost hurt when first applied to itchy, inflamed skin but the Euzema didn’t and worked almost immediately. My daughter’s itching stopped almost immediately, too, so she had no complaints.

It’s somewhat expensive, around $50/bottle, but the effective dose is small enough that the bottle should last you a while. It does seem to be more effective than over-the-counter creams, it’s all-natural. Given that it definitely does work, there’s plenty of “pros” to account for the cost.

As for cons, I’m not a big fan of the scent and again, the price is a bit steep, at least at face value. If it works for you as well as it appears to have worked for us, though, it’s well worth it. In particular if it works for psoriasis or for stubborn rashes, it’s definitely worth not having to use steroidal creams.

Euzema skincare claims that it also works on small cuts and pimples, and also on freckles by diminishing their appearance. The most useful aspects do seem to be on rashes, allergic reactions and chronic skin problems.

Have you been dealing with chronic, itchy skin problems and do you have a go-to product that helps?

I’d love to hear about it in the comments, especially if you have experience with Euzema yourself.