Why Your Kids Should Watch The Dragon Prince And You Should, Too 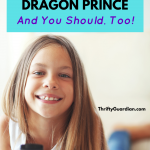 Netflix has come a long way since they were essentially streaming whatever content they could license. They are now a huge producer of exclusive content – for better or worse – but sometimes they really knock it out of the park.

The Dragon Prince is a show that my son stumbled upon one day while watching Netflix on his tablet. Normally he’s pretty into tablet-time, but I’d never seen him so engrossed in any other show. He talked about it at dinner, he talked about it before school in the morning and it was what he wanted to talk to my husband about when he got home from work.

And when he ran out of episodes, he legitimately cried; he was that into the story. I started to wonder about just what was the deal with this show? Could it be that good?

Is the Dragon Prince Good?

With season 3 just having been released to Netflix, we were determined to sit down and watch it with him. When we told him it was out, his face lit up like it was Christmas and he excitedly started explaining the backstory (which we will do in a much less sugar-hyper-six-year-old style).

Particularly if you or your children were fans of Avatar: The Last Airbender, which was written by the same person, then this show is going to just click. Even if you’ve never seen Avatar, though, there are plenty of reasons to greenlight this show on your kids’ watchlist. Let’s take a look at why.

The world here is rich with complex characters, backstories and fantastical elements, and the show does a fantastic job fleshing it all out. Particularly, it does this without out-of-place exposition, layers of indecipherable names and convoluted plot points. This isn’t Game of Thrones for kids; it’s better than Game of Thrones and it’s easier to understand.

The show is set in Xadia, a continent with elves, humans and dragons. The elves and dragons find power in the elements, giving them magical abilities and giving each faction a unique concept. There are fire elves, sea elves and so on. The humans – who always seem to ruin everything – can’t use elemental magic, so in their lust for power, they dive into dark magic. This requires the life force of magical creatures and animals, and so the humans are banished to section of the continent to ruin for themselves; we are why we can’t have anything nice.

The dragon prince himself comes into the foreground when, after 1,200 years, the humans kill the dragon king and take his egg, which holds the titular character. Without spoiling anything, the story progresses as the humans move closer to war with the elves and dragons. Season 3 picks up beautifully from where season 2 left off and everything about it is well-designed, with a complex story that isn’t heavy and doesn’t require a supplemental book to keep up.

The animation is again very similar to The Last Airbender, but even more refined. Creatures are truly fantastic and whimsical, like the little adoraburrs, but can also be impressively threatening like the dragons of Xadia. Visually, it’s awe-inspiring and really is just as gorgeous as it is good at telling a compelling story.

One of the very first things we noticed was that a human captive of the Sun Elves – the general Amaya – is deaf; she communicates with sign language. It’s not until you see a deaf character in a show that you realize how often you don’t see deaf characters represented. This isn’t a throwaway character, either or a half-hearted attempt at the facade of inclusion. The creators of the show consulted with sign language experts and coalitions for the deaf to create a very real, very powerful character.

Mixed families are also represented in that the king of Katolis is raising the son of his deceased wife, whom she had in a previous marriage. The royal family is biracial as well, another aspect of everyday life that somehow gets left behind when creators write characters.

The elf assassins Runaan and Ethari are married and male. Whereas many shows might introduce a gay couple and have some characters balk at the concept or at least fidget, the show simply presents them as a couple. I asked about the characters and my son simply said something about “his husband”. It didn’t throw him off or make him ask questions; it simply was a fact that these two elves loved each other.

The primary protagonist is a literal child

Prince Ezran’s journey to reunite the dragon prince, Zym, with his mother is complex. Ezran can speak with animals, a magical ability that humans simply don’t possess. He has to make difficult decisions, and the morality of the story is not often clean-cut. Ezran is not a philosopher king nor is he held up as a perfect leader; he makes choices for the best of his people, but as a child would. This represents a lot for kids, who are often used to watching fantasy shows about adults.

Ezran is endearing, strong and authentic, and this makes the entire thing very enchanting.

I found myself laughing out loud multiple times per episode. The characters are charming and awkward at times, but the storytelling is top-notch and uses visuals to drive the plot as much as dialogue. During our season 3 binge, we were asking our son about characters and eventually we could tell he was getting annoyed, so we’ve resolved to re-watch all three seasons again. It is any interesting paradigm, though, being the one who won’t be quiet during a show – we like to think of it as preparing him for parenting.

The Dragon Prince deserves a binge-watch

The episodes are short, around 30 minutes each, and the show is utterly enjoyable. It’s teaching our kids bravery, inclusion and that children can make a difference and should be heard. Especially now that winter is coming and watching Netflix is a nice way to spend a lazy Saturday, give The Dragon Prince a try. Chances are you’ll join us in bemoaning that there aren’t any new episodes left and that we have to wait for season 4.