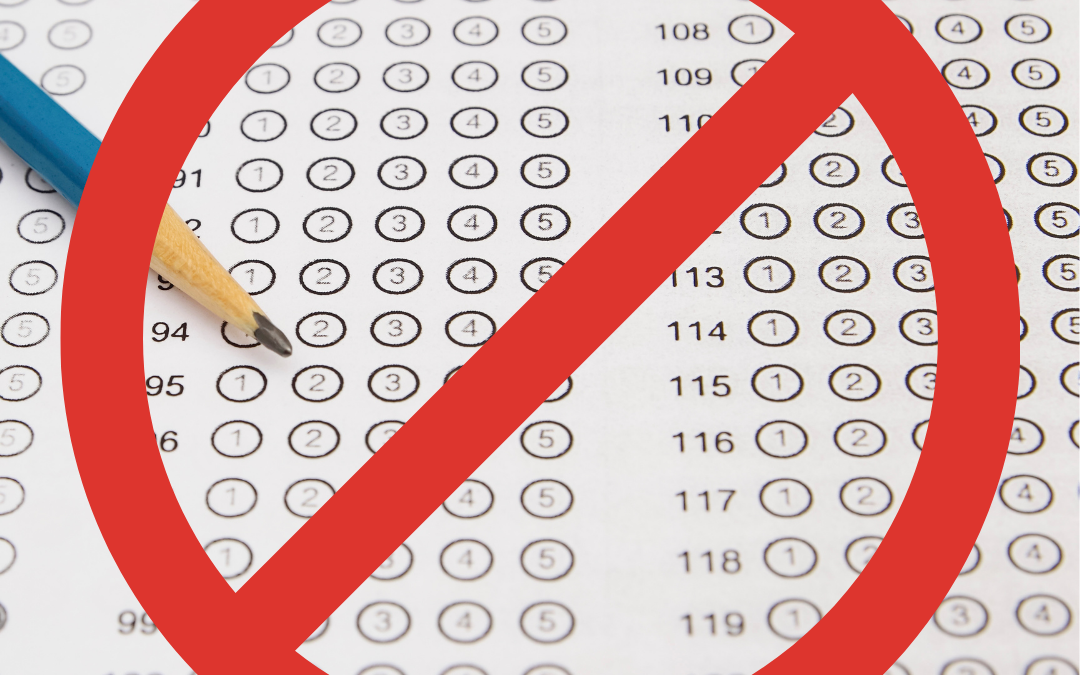 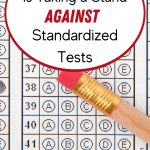 I’m so over standardized testing. Maybe not as over it as my Kindergartner and 1st grader, but close! Given this past year’s health crisis, my children are still both learning remotely. Most days are actually pretty okay. And I recognize a large part of that is not only because I work from home, but my husband has also had the privilege of being able to do so most day this past year.

That said, I truly cannot imagine the chaos and heartache that standardized testing brings for some families. This testing is “an adaptive achievement and growth test” supposedly built to help teachers adapt to each student’s learning level.

My children are smart. Like raptor-smart. And I don’t say that to brag (well okay maybe a little…) but to say that most things right now in school come easy to them.

And I very much recognize that’s not the case for many other students. Because guess what? Standardized testing is STUPID.

The Case Against Standardized Testing

Before we get too far into this, I want to explain my parenting style very briefly to those who may be new readers. I believe in positive reinforcement and making conscious choices. I do my best never to yell – though goodness knows we all get frustrated – and I genuinely believe my children are two of the very best young people on earth.

I am their light house as they navigate this world. I serve as their role model, mentor, Mother, and guide. They know that while I will absolutely make demands of them to help them grow and learn, I will also serve as a source of forever love.

I say this partly because I still worry about the judgement that comes with putting so much of my life out there for anyone and their cousin to read. It’s something I’m working through, but it’s there nonetheless.

That said, my 6 year old has serious test anxiety. She’s a perfectionist at heart, like her mother, and wants to do her very best. She KNOWS she knows the material, but the idea of making a mistake paralyzes her.

It’s the same reason she’s loathe to raise her hand in class and speak out.

The past two days have seen both of my children in tears. It would have been emotional chaos had my husband and I not had the flexibility to adjust our work schedules, and take two hours out of our mornings to help keep the kids calm.

Chaos that seriously might have scarred my children in the long term.

You simply canNOT use testing as an assessment tool for children in the classroom and as this over-arching tool with which to judge the school. How can one honestly expect a 6 or 7 year old to understand that this Friday’s math test is for a grade that will impact your overall score for the semester while next Friday’s standardized test isn’t?

It’s something to think about, isn’t it – could part of the reason so many of us struggle with anxiety problems is because of nonsense like this woven throughout our formative years? 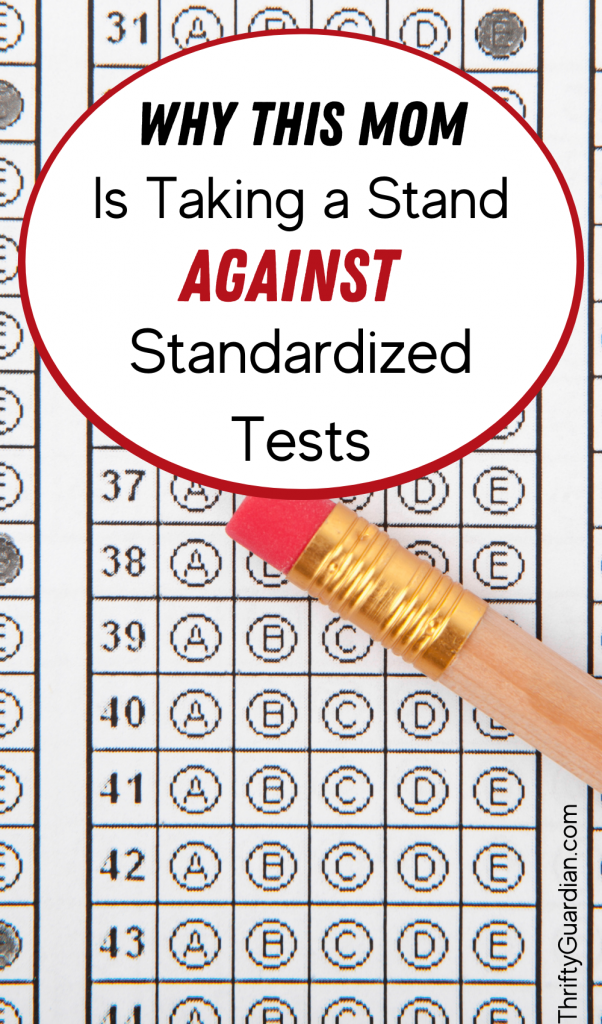 The Hypocrisy of Testing


Every day last week included the teacher’s prepping these kids for standardized tests:

“Make sure you sleep well!”

“Eat a good breakfast that morning!”

While conversely telling them –

Children are not built for this!!

This is especially true – I think – for those who either tend to do better with standardized testing or who are more advanced when it comes to in-classroom learning.

Because guess what? The MAP test – which is the standardized test my children are taking – now automatically adjusts itself to provide questions to the child based on where it thinks they’re at. It’s built for children from Kindergarten through 2nd grade. This is a HUGE learning gap! And children cannot be expected to leap frog through it and just accept they’re getting things wrong when they’re currently taught to strive for right.


So if your child is more advanced or hey – just a good guesser – then they get even more difficult questions that they couldn’t even begin to answer! And no matter how much we say “it’s okay to be wrong on this” it’s not going to fix the problems already created.


My Child Isn’t Wrong, The Test Is

My Kindergartner had questions yesterday that included fractions, identifying quadrilaterals, division, and figuring out the perimeter.

A 6 year old was expected to just accept that she was going to get almost every question wrong, but “oh no big deal – this is the whole point of THIS test!”

Can we just stop pretending that this test is actually going to impact the way my child’s teacher works with her next year? The lack of support in the education system and the student:teacher ratio would be an article itself, but c’mon – no teacher is going to dramatically adjust her syllabus to fit the needs of each child assigned to her based on this test. It’s impossible!

As a doe-eyed optimistic (non-Tide pod eating) Millennial, I truly believe our generation is paving the way for so many brilliant changes. And one of those changes absolutely has to be standardized testing.

We’re already well on our way to proving we’re just fine without it! We did so in March of 2020 when nearly two-thirds of colleges and universities went “test-blind” and accepted students without SAT or ACT scores. Overall federally mandated testing was cancelled in 2020, for the first time in nearly two decades.

And guess what? Somehow we were still able to assess, adjust, and educate our children through the 2021 school year.

We need to stop narrowing the curriculum down to reading and math. Again, that’s a whole ‘nother subject for another day, but in general – assessing a child’s ability to learn and comprehend based even partly on standardized tests in reading and math is archaic.

But I hear you – “without standardized tests, how would schools measure learning?”

One alternative would be portfolio-based assessment. Weren’t we (us 90s kids at least) threatened with things going on our “permanent record”? What is that even – beyond our report cards and perhaps a resume of extracurriculars? Instead let’s create long-term portfolios that grow with the child, giving a multidimensional look at their overall capabilities and growth.

I’m also quite confident in knowing that soon we’ll have classroom management software and assessment tools that make standardized testing obsolete. Why not get ahead of the game and start to plan for the future rather than living in the past? I know this past year was wild for all of us, but NOW is the time to make the shift.

Or how about we eliminate the direct testing (and anxiety) completely? When my children were in preschool, the teachers were all about stealth or game-based assessments. Keep it fun, and keep it educational! Weave assessments directly into the fabric of the child’s daily learning and watch how easily the curriculum can actually start to mold around individuals rather than the whole.

Even as I write this I hear my 7 year old groaning in frustration while my husband does his best to calm him. Yesterday my son missed a fun activity because his test ran long and he’s stressed it’ll happen again. Both kids were expected to get right back into classroom learning when their tests were done. This isn’t okay. Not for my kids, not for your kids, not for anyone. Standardized testing must come to an end.

When you design a curriculum for everyone, you’re designing a curriculum for no one. The gap as it appears in standardized testing is just too big. And yet we’ve got out-of-touch politicians denying states the right to cancel this testing!

Our children deserve better. Our Educational system in America is broken, that’s a given, but we can fix it. And we can start by looking toward a smarter future that doesn’t include standardized tests.

What say you – sound off in the comments below! Should standardized testing stop?